The price of everything...the value of nothing 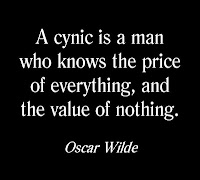 It is easy to be cynical. Nowadays, it seems to be the default position. It has been on my mind over the past week or so, when the run up to the London 2012 Olympics reached fever pitch. I noticed the jaded, cynical part of myself becoming bored with it all, even before it had begun. I listened to others criticising, blaming, ridiculing and lambasting the organisers, the politicians, the security firms, the military, the cost... and whilst I didn't agree with all of it, I tapped into some of the cynical debate.

And then I watched the opening ceremony which was technically marvellous, delightfully choreographed, poignant, humorous, beautiful and.... uplifting. I have even watched some of the sport which is exciting, interesting and...uplifting.

And the day after the opening ceremony -  the usual flurry of jibes on Facebook and it sort of burst my bubble. And I didn't want my bubble burst! Because the feeling of being uplifted felt better that than the cynicism.  The cynics will tell me that's what "they" wanted, for me to be distracted from reality by the spectacle and I see some of the truth in this, but I also see the beauty, friendship and joy in the spectacle.

Why do we assume that cynicism is more real? Can we not see the truth, as well as the beauty and joy? Someone once said that if we took the sentimentalism of religion and brought it together with the cynicism of the media then we might have something close to the truth. They may be right. For me, it is about acknowledging the truth of darkness but recognising that it is balanced by light. Everything is.