Let's Keep Politics Out Of It?


Someone said this as part of a reasonably light-hearted  Facebook exchange the other day. And I have to confess, it pushed my buttons. And for all sorts of reasons. The comment was in response to me getting only every so slightly ( and light-heartedly) bolshy about gender politics. And I confess to using the F word!
Feminism
The comment left me feeling that I had been put in my place.  That’s OK, I am willing to accept responsibility for that feeling. I am sure that it wasn’t intended to have that effect ... or maybe it did. I don’t know the person who said it so I am sure it wasn't personal. Either way, my inner child did not respond well to being told to button it! Happily I am used to giving my inner child the attention it deserves, and ignoring it when it doesn't!
“Let’s keep politics out of it...”
On the surface, it seems like a benign, peace-keeping sort of a thing to say doesn’t it? But I couldn’t leave it alone in my mind. It pushed my buttons beyond my childish annoyance. The situation that sparked the online discussion was actually really silly but there were aspects of gender politics wrapped up in it that nobody seemed quite willing to explore. Perhaps incase they spoiled a bit of fun.  A sort of “don’t mention the war” scenario that meant that I had to bite my virtual tongue and leave the conversation. I could’ve carried on, but it wasn’t my conversation to hijack.
Years ago, when I was a young arts worker, I worked very briefly with a really clever, switched on, talented young woman and something she said really inspired me. It sticks in my mind to this day.
She said “Judith, everything is political”
When you think about it, there is very little about out lives and experiences that don’t encompass some aspect of politics. Gender, work, transport, food , religious beliefs, nationality, family life, children,  education, health, crime, defence, farming, fashion, beauty, even the weather! We don’t have to view them in a political way, but they ARE influenced by politics at some level. Of course, there is a difference between politics and party politics. Acknowledging the political isn't necessarily about aligning oneself with an ideology, it is about recognising that our choices are influenced not just by our own internal markers, but by wider cultural and, yes, political issues.
Ignoring the political could actually be about proactively ignoring certain issues in order to preserve a state of mind, a life choice, or a point of view. A comfort zone - we all have them. And we have all experienced the feeling of cognitive dissonance that comes from having our opinions and beliefs challenged by another "truth". It might have felt comfortable having not known something. But once we know it, ignoring it doesn't make it go away. Perhaps there is also the desire to avoid confrontation? I understand this. I like peace too. Because of this, I committed to peaceful dialogue and believe that there are ways to have political conversations that aren't about shouting at each other, despite the example that our institutions of government set us. 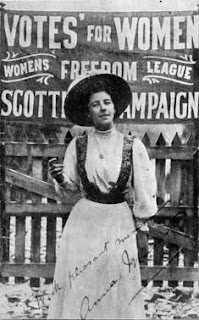 I started writing this post on International Women's Day. On This day, and every day, I remember the sacrifice of my female ancestors. I applaud the generations of feminists who fought on my behalf for the vote, for education, for equal pay. And I remember, with gratitude, how far we have come. But things are still by no means fair. Not here, or anywhere else. In many places around the world, the idea of equality for women is still a distant ideal. So I also remember that without politics, I would not be sitting here, writing this. And (so far anyway) nobody is going to arrest me for it.  I can read and write. I received a secondary and a higher education - free!  I have the right to vote. I can work and travel and wear the clothes I want to wear. I have reproductive choice. And I remember that my great great grandmother had none of these things. It is less than a century since she died, but I have rights that go beyond what she could have dreamed of (and she dreamed) for her female descendants.


I revisited the Facebook discussion again today and I was heartened to see that I was not the only one who had made a similarly “political” comment. Interestingly, though, the “ let’s keep politics out of it” comment had been deleted.
Posted by Jude Mills at 13:36