The Divinity of Dogs 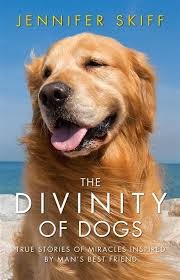 I have just finished reading this book. A collection of individual tales about the relationship between human beings and dogs, and what the individual humans believed to be the divine presence or intervention of the dog in their lives. Some believed that God was working through their dog, some believed that the dog's innate sixth sense came to their rescue, some felt simply that their dog's physical presence healed, or helped or rescued them in some way. All the stories were moving and although it was a highly sentimental volume, I confess to being moved to the odd tear! In fact, the final story in the volume had me convulsing with tears in bed last night!

We have a dog. A delightfully affectionate, energetic, nutty Jack Russell called Ripley who barks and occasionally bares her teeth into the hearts of everyone who makes her acquaintance. She is all heart. And some.

Do I believe she is "divine?" Well... yes, in the way that we are all divine. In that sense I believe all creatures are equal.  For this reason, I am never quite sure how to describe her. She is not a "pet." I don’t like that terminology. She is another little being who shares out lives. And we love her. In France they call pets companion animals – which is sweet, but not quite right either. She is our friend. We are doggy people, in that we share our lives with a dog. And I recognise that some people are not doggy people. I think I was probably one of the Not doggy people at one point but I have since discovered that I had closed my heart and mind to one of the greatest joys of being a human being, and that is sharing your life and heart with a dog! there is no doubt, and much research backs this up, that dogs and humans have a very special relationship.

Because I have just been abroad, I have been thinking about Britain, and how we are supposed to be a nation of dog lovers. But it strikes me that for such a nation, we don't actually like dogs very much!

Before I was a doggy person, I never really questioned the “no dogs” policy of shops, restaurants and various other facilities, but having accepted a dog into my heart and my family, I notice that my little friend is unwelcome in many public places, and as far as I am concerned, that makes me unwelcome too.

We've just returned from a holiday in Europe – France, Italy and Switzerland- and in France especially I was struck by how perfectly normal it is to see animals in restaurants and shops. We saw many dogs sitting quietly at their owners’ feet whilst they were out for their evening meals, sitting on laps at cafe tables, playing with other dogs in the middle of a crowded bar, I realised that not only is it considered perfectly normal to take your dog out with you, it is actually considered strange that you would not take your dog out with you.

We stayed in one place that had a cat actually on the bar! This was where it sat. Nobody shooed it away because nobody thought anything of it.

Oh but the germs!

We could go into an in-depth microbiological analysis of the pathogens associated with domestic cats and dogs - and our unhealthy obsession with ineffectually attempting to decontaminate every surface we touch - but I bet you that compared to the unwashed hands of the bar’s clientele (and lets face it – staff) and the damp cloths they use to wipe the bar and tables, the cat posed very little hazard.  It was cute and it made people smile.

And, really, what harm does it do? I suppose people would argue that animals are dirty and therefore inappropriate  in a place where food is served. Yes, I kind of get that, but considering that most dogs sit on the floor, and our shoes are on the floor, and our shoes (that have been walking outside on the dirty pavements)  are welcome in the restaurant on our feet,  what’s the problem? People are welcome in restaurants  and, judging by the hundreds of people I have witnessed leaving public toilets without washing their hands, we are just as "dirty" as a species as dogs are. And we don’t have to sit on the floor!

There is also the issue of dogs not being welcome in hotels, B&Bs, self-catering cottages etc. SO may places don’t accept dogs and I have never understood this. We run a self catering business and the only real issue with dogs is the amount of hair we have to hoover up. I remember filling the hoover twice after one doggie guest and declaring at the time that it looked liked somebody had shaved a bear! Other than that, we generally have to do significantly more cleaning after children! MUCH much more!

We have also been denied access to beaches. This is the worst. Dogs LOVE beaches and so do owners. Of course the issue is with fowling because some folk think it’s OK not clean up their dog’s poo.  In Switzerland (aka the cleanest country in Europe) you hardly never see dog poo on the ground, or litter for that matter, but there are dogs everywhere ( they're not all St. Bernard's ;-) ) This is partly cultural, people are just clean and tidy there because they are brought up that way. BUT they also provide poo bags and bins for people to use to clean up after their dogs! They don’t insist that people’s beloved dogs stay at home -  or in hot car ( another British dog "loving" phenomenon)  because they happen to go to the toilet, like the rest of us.

In many ways the divinity of dogs is true to me. If I was creating a fiction, I would say the dogs were "sent" to help us learn how to be better people. There is a well known saying (I'm paraphrasing) " I want to be the person my dog thinks I am." Dogs are completely and wholeheartedly unconditional and love us no matter what demons we are able to conjur in our own regard of ourselves. Dogs have a lot to teach us. To open your heart to a dog, is to open your heart to who you really are.

Addition - 25/11/13
I recently came The dog presciption. Perfect. Everyone should be prescribed a dog!

“Dogs are our link to paradise. They don't know evil or jealousy or discontent. To sit with a dog on a hillside on a glorious afternoon is to be back in Eden, where doing nothing was not boring--it was peace.”― Milan Kundera