We visited Crarae Garden yesterday and although I've been before, it's the first time I realised that they have an ancient burial site in the garden. In fact, the place has been a settlement and ritual site for over five thousand years. Living in Argyll, we are blessed with numerous ancient sites - standing stones, burial cairns and ancient carved rocks and I was amazed to see this place - in the middle of someone's garden! OK, now the garden is owned by the National Trust and open to the public, but walking round the carefully maintained paths, there is more to this garden that a collection of plant species.

It has a beautiful flowing energy. A river gorge runs through the centre, and bridges span from one side of the garden to the other. As the water descends it reaches deep pools surrounded by trees and ferns that give it a timeless, magical feel.

And then, at the bottom of the garden, you come to a Neolithic burial cairn. Its top stones have been removed at some time - and the inner chamber is revealed. Reading the adjacent plaque about the archaeologists investigation, I was surprised that  I felt a little angry. The three human bodies contained in the "excavation" had been removed. And of course, this is the case in almost all archaeological digs. We learn a great deal about how our ancestors lived (and died) from archaeologists and historians but whilst there is a scientific acknowledgement of their beliefs and rituals, there is the obvious emotional disconnection. 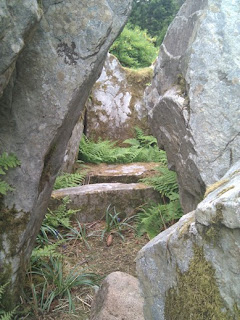 The passage of of certain period of time seems to allow us to disregard the sacred nature of a burial. And I wonder what this time period is? Modern graves are tended carefully, but older ones often fall into disrepair. And ancient ones? When there are no individual connections to those buried inside, then perhaps the significance is lost. I wondered about the bodies removed to a laboratory, or museum and felt sad that the passage of time had turned the sacred into science.

So I made a connection with my ancestors in that place, and as I stood, I became aware that they - no longer in the physical - actually have no need of a burial  place. They do not connect with the place of their death, their connection is to us - to their living descendants. The place is ancient and sacred  to us because of its connection to those who lived in the past- and continue to live in spirit.